In a nutshell, it will help make your simulation code scale.

SyDEVS allows physics solvers, state machines, and other types of simulation models to be implemented as independent nodes and later integrated. Even nodes that use different time steps (or variable time steps) can be linked together and allowed to interact.

Below is an example of a multi-solver simulation developed by Rutgers University, York University, and Autodesk Research using SyDEVS as the underlying framework. Click the image to see the animated results on YouTube. 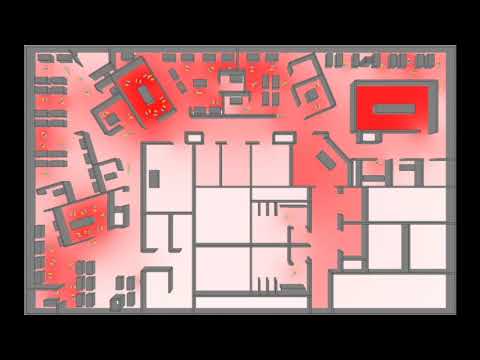 The SyDEVS framework is based on the Symmetric DEVS formalism, a set of conventions combining three modeling paradigms: discrete event simulation, dataflow programming and agent-based modeling. These foundations give SyDEVS the generality needed to support essentially any type of simulation, regardless of domain, time scale, or time advancement scheme.

Download the latest SyDEVS release here, or fork, clone, and build the repo.

SyDEVS is released under the Apache License 2.0, a permissive open source license.

Inquires about SyDEVS can be directed to Rhys Goldstein.